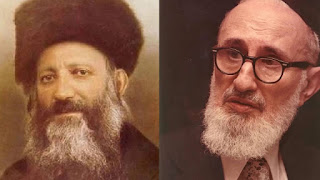 1) Yesterday we mentioned Levi Cooper's article from The Paths of Daniel. Among the other interesting articles in this large book is one by Dr. Marc Shapiro, entitled, "Samson Raphael Hirsch and Orthodoxy: A Contested Legacy." Read it here. Shapiro, who is the author most recently of Changing the Immutable: How Orthodox Judaism Rewrites its History, keeps true to his academic form, as he highlighted many of the censored writings of Rabbi Hirsch in this article. Though much of the content in this article is already found in Shapiro's other books and writings, the article is nonetheless a fun read.

2) The goal of the article is to portray the "contested legacy" of Rav Hirsch (Wikipedia bio here), showing how different factions of Orthodoxy have "manipulated" his legacy to ensure that it does not contradict their own. Shapiro's concluding paragraph states it best:

Jewish history is replete with great rabbis who were enormously influential in their times. Usually, a generation or two after their deaths, not only has their influence waned, but in many cases they have faded into obscurity. It is the rare individual who is not only remembered generations later but also continues to influence Jewish life and thought. Hirsch is one such figure and together with his continuing influence come the almost inevitable disputes about how to interpret his teachings, as well as the polemics against his views...

3) We have on several occasions discussed the fact that this has been the reality regarding many of the greatest leaders. It is often due to a combination of their complex thinking and dominant influence.

a) We have, for example, discussed the contested legacy of HaRambam. Herbert Davidson wrote in his Maimonides: The Man and His Works:


...While there is no evidence that Maimonides lived the philosophic ideal, he plainly lived the rabbinic ideal to the fullest. Did the two incompatible personas then jostle in his breast, one a devotee of rabbinic law and the rabbinic ideal, and the other a devotee of philosophy? Or was he perhaps a full-fledged philosopher who lavished decades and boundless effort on his rabbinic writings, who observed the ritual regulations to the letter and beyond, merely in order to create a smokescreen for concealing his revolutionary philosophic ideology and a surreptitious vehicle for advancing it? Or was he, on the contrary a halakhist, whose philosophic interests remained firmly under the thumb of his dominant rabbinic persona? Readers in recent years have endorsed each of the three positions...


Read it in its original context here, and take a look at a related devar Torah from several years ago here.

b) R. David Singer similarly wrote about this phenomenon regarding Rav Kook, in his "Rav Kook's Contested Legacy." He concluded the article with this sentence:

Rav Kook's teachings will remain hostage to the clash of contending forces in Orthodox life today.

c) We have also visited this reality regarding Rav Soloveitchik.

Larence Kaplan, the editor of Maimonides - Between Philosophy and Halakhah: Rabbi Joeseph B. Soloveitchik's Lectures on the Guide of the Perplexed, penned a classic article on this topic nearly two decades ago - "Revisionism and the Rav: The Struggle for the Soul of Modern Orthodoxy."

In the opening paragraph he underscored the importance of this debate, explaining that it touches on more than just the legacy of a single person:

The Rav, one of the towering rabbinic scholars and thinkers of our era, was, as is well known, the teacher, guide, and above all, the supreme halakhic authority of the modern Orthodox community for over fifty years. The struggle, then, is not just scholarly, but ideological as well. Indeed, in the deepest sense, it is a struggle over the direction and future course of the modern Orthodox community, a struggle over its very soul.