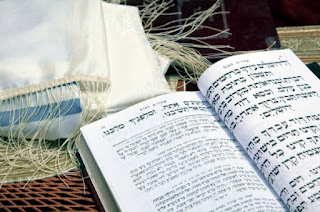 1) During our class prior to Minha last week, we discussed the issue of saying the Aramaic portions of the Selihot while praying without a minyan. The Selihot Bet Yaakob, which our synagogue uses, lists several relevant halakhot, among them:

We discussed the Talmudic source (Shabbat 12) upon which this matter is based - the gemara (Shabbat 12) states that the malakhei ha-sharet do not understand Aramaic, which diminishes the efficiency of an individual's prayer.

We mentioned that the pesak preventing an individual from saying these prayers follows Hakham Ovadia Yosef's opinion in Yehaveh Da'at 3:34.

2) We mentioned, as well, that R. Yisshak Yosef recounted that upon his first encounter with Hakham Yom Tob Yedid (18 years ago), the latter admonished him for listing this law in Siddur Hazon Ovadia. Hakham Yom Tob's claim, in line with Kaf HaHayim, was that although the individual's Aramaic prayer may lose efficacy in such a circumstance, there is no reason to prevent him from saying it.

3) R. Yisshak Yosef quoted to Hakham Yom Tob the teshuvah of Ben Ish Hai in Torah LiShemah (no. 49). We read and discussed the details of that teshuvah.

4) Interestingly, R. Meir Mazouz disagreed with Hakham Ovadia on this matter, and permitted individuals to recite the Aramaic portions. He claimed that this is the long-standing Sephardic minhag, and brought several proofs in its support.

Lewis Glinert briefly mentioned the fierce rabbinic condemnation of Aramaic prayers, as part of a larger section in his recently published The Story of Hebrew (available here).

6) Marc Shapiro discussed the theological difficulty posed by the notion of malakhei ha-sharet's involvement with our prayers, as the core of his discussion of HaRambam's fifth ikkar, in his The Limits of Orthodox Theology: Maimonides' Thirteen Principles Reappraised (available here).

This specific analysis of Shapiro was subsequently contested by several people, which we will discuss on another occasion. In the meantime, listen to the two classes wherein we discussed the general significance of Rambam's ikkarim here and here. Follow along with the source sheets here and here.