The "Target Audiences" of Halakhic Writers 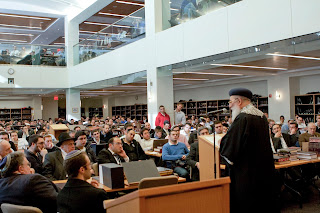 1) Several weeks ago, in a class dedicated to the life and thought of R. Asher b. Yehiel (Rosh), we briefly discussed different genres of halakhic writing. We distinguished between works written for the "scholarly elite" and those written for the "masses." We noted the several reasons that Rosh was dismayed by the "accessibility" of Rambam's Mishneh Torah, and the irony that his son R. Yaakov composed the "masses-friendly" Tur, and we suggested a Spanish influence. Listen to the class here and follow along with the source sheet here.

2) I recently read several excellent articles by Prof. Judah Galinksy that are relevant to this topic. The articles focus on the halakhic literature of Germany and France in the 13th Century.

In Between Germany and France: Two Approaches Toward Popularizing Jewish Law, Galinsky distinguished between German halakhah works written during this period -  purposed specifically for the scholarly elite, and French works -  which were written for the interested layman. Read it here.

In Rabbis, Readers and the Paris Book Trade, Galinsky suggested several factors that led to this difference. One specific reason is a "Sephardic/Middle Eastern" influence on France. He noted that this was probably first relevant after the arrival of Rambam's Mishneh Torah in France during that time. The Sephardic/Middle Eastern heritage - dating back to the Geonim - was generally inclined to "inclusive" writing, a form and style meant to be accessible to all. Read it here.

The 13th Century French work Sefer Missvot Gadol  by R. Moshe of Coucy, was in fact built upon Mishneh Torah, and somewhat modeled in its fashion, as Galinsky showed in his The Significance of Form: R. Moses of Coucy's Reading Audience and his Sefer ha-Mitzvot. Read it here.

3) Fast-forwarding several hundred years, I believe that the "Sephardic/Ashkenazic divide" in halakhic output is still alive. I am reminded of the time that my Ashkenazic rosh yeshivah's wife - who hailed from a prominent rabbinic family - noticed a boy holding the book Shemirat Shabbat KeHilkhetah. She admonished him for using the book, telling him that that book was never allowed in her father's home.

The book, written by R. Yehoshua Neuwirth, is an Ashkenazic guide to the practical issues that arise on Shabbat. It received haskamot (approbations) from several of the leading rabbis of the generation, but other gedolim specifically withheld their letters. The classic explanation for this is that there were "too many lenient rulings" in the the book (thus says Wikipedia - here), but I have always suspected another (and perhaps stronger) reason for the rabbinic hesitance -- the novelty of an "accessible" practical book on Ashkenazic hilkhot Shabbat. The very concept was new to them, and thus a cause for alarm.

4) Indeed, contrasting the works of the leading Ashkenazic and Sephardic halakhic decisors of the past generation reveals this same phenomenon. Rabbi Meir Mazouz, the rosh yeshivah of Yeshivat Kisse Rahamim named, in his mind, the three greatest Ashknezic and Sephardic rabbis of our generation:

Whereas all three of these Ashkenazic rabbis' halakhic works are responsa (שאלות ותשובות), which were specifically written for the advanced scholar or student, the works of the Sephardic rabbis are far more "accessible":

a) Though R. Ben Zion Abba Shaul only published responsa during his lifetime - Shu"t Or LeTzion, his children and students published his halakhic rulings following his death. They were published as a continuation of the series, in the form of a practical and easy to read "upper section" - which summarizes the "bottom line" of the law, and a more lengthy "lower section" - in which the various sources and approaches are laid forth and discussed.

b) R. Moshe Levy wrote responsa Tefillah LeMoshe, but his clear claims to fame are his  halakhic works on hilkhot Shabbat - Menuhat Ahavah, hilkhot berakhot - Birkat Hashem, and hilkhot ribbit - Melaveh Hashem. Each is structured with the "upper" and "lower" section, as above.

c) And now to the halakhic works of R. Ovadia Yosef...

Hebrew University recently published a book that contains monographs of many of the previous generations great rabbis, entitled HaGedolim. Among them are R. Ben Zion Abba Shaul and R. Ovadia Yosef. As I read the summary of the various works that Hakham Ovadia had published during his lifetime, I noticed a development and direction in his halakhic output. (Read the summary here).

Though there are several works which I will leave out of my analysis, I detail the basic and broad contours of Hakham Ovadia's halakhic writing below:

Hakham Ovadia's first serious halakhic writing was a commentary on Masekhet Horayot (it was later published at the end of Yehaveh Daat vol. 6). He then wrote a "counter-commentary" to Ben Ish Hai, in which he lay out the rationale to the many rulings from which he diverged (due to its "revolutionary" content, it could not put to print until several decades later - in the six-volumed Halikhot Olam). Hakham Ovadia then wrote Hazon Ovadia on the laws of Pesah, which consisted of long analyses of specific laws and issues related to Pesah. He then began work on his grand responsa Yabia Omer (which reached 10 volumes in 2004), which was written on all areas of Jewish law and also contained elaborate discussions that analyzed every angle of the given issue.

Each of these initial works were written for the "elite" - the halakhic scholars who were familiar with the general issues, sources, halakhic language, etc., and were interested in his specific summary and ruling regarding a particular issue.

(Hakham Ovadia's son, R. Yitzhak Yosef, later "collected" these rulings of his father and made them accessible to the masses in his Yalkut Yosef - written in the "upper" and "lower" sections structure).

In the late 1970's, R. Ovadia Yosef began a new endeavor - Shu"t Yehaveh Daat. This began his outreach to a "broader" reading base. Based on rulings he had broadcast over the radio, Hakham Ovadia described its purpose (in the introduction to vol. 1) as a condensed version of Yabia Omer. It was meant to open his rulings to a wider circle of people, by choosing only the more "important" sources relevant to the analyzed issue, and resulting in 2-3 page "easier to read" question-and-answers. And then, during the last 15 or so years of his life, Hakham Ovadia began his final project - the set of books known as Hazon Ovadia. Written in the "upper" and "lower" sections, he wrote on the Jewish holidays, hilkhot avelut, pruzbul, berakhot and much of hilkhot Shabbat.

Though continuing to publish subsequent volumes of Yabia Omer throughout his lifetime, the last forty or so years of Hakham Ovadia's life took a sharp turn toward an ambition of reaching beyond the "elite," to the "masses."
Labels: Hakham Ovadia Yosef, Halakhah, Rosh
Newer Post Older Post Home